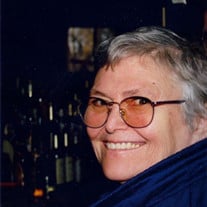 Barbara Ann (Malone) Meggison PORTLAND - Barbara Ann (Malone) Meggison, 83, passed away after a long illness on February 23, 2021 at Maine Medical Center, Portland, Maine. Barbara was born in Portland, Maine on December 8, 1937, the daughter of Andrew and Shirley (Manchester) Malone. She grew up in South Portland where she met and married, Donald Green, Sr. They started their family and later moved to Portland. She enjoyed going to the beach, crocheting, and raising her children. Barbara worked at First National Bakery, UNUM and S.D. Warren/Sappi. After her first marriage ended, she married William Meggison in 1979 and made her home in Gorham. They had 34 years together before her husband predeceased her in November, 2013. She leaves behind her six children, Donald Green, Jr. and his wife Karen, Andrew Green, Sr. and his wife Linda, Darlene Veltre and her husband Robert, David Green, Sr. and his wife Patty, Daniel Green, Douglas Green and his wife Lee; 21 grandchildren, 32 great-grandchildren, and 4 great-great-grandchildren, all of whom she loved dearly. Barbara will be laid to rest at Brooklawn Memorial Park in Portland, Maine. A private memorial service will take place later in the spring.

The family of Barbara Ann Meggison created this Life Tributes page to make it easy to share your memories.