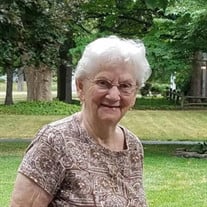 The Life Story of Blanche Eve Reese by Albert and Joseph Reese On March 14, 2022 Blanche Eve Reese peacefully passed away in Freeport, ME at the age of 94. Our Mom was born Blanche Eve Lewis on February 17, 1928 in Parish, NY. An error on her birth certificate mistakenly had her listed as Blanche Eva, although she always preferred Eve. She was the 3rd child of Frank and Mildred Lewis. Growing up she was a skinny girl who would sometimes be called ‘clothespin’ - a nickname she didn’t like at the time. Later in life she found it to be more flattering, using it as her ‘handle’ during the CB radio craze of the late 70’s. Mom attended Parish High School and loved to sing. She was proud to be chosen as a member of the ‘Triple Trio’ singing group during her school years. We have fond memories of Mom singing songs to us as children – often on the long car rides back and forth to visit relatives. No video games or movies to keep us occupied! Some of her favorites were, “Won’t You Come Home, Bill Bailey,” “A Bicycle Built for Two,” “School Days,” “Down by the Old Mill Stream,” “Marizy Doates,” and “Three Little Fishes,” to name a few. She stayed in touch for over 80 years by telephone, writing letters, and eventually emails with a few of her childhood friends - Gretchen Sayer, Elizabeth Karboski, Jeannie Nellis and Roberta VanAntwerp. One of mom’s first jobs was as a telephone operator. Her co-worker mentioned the new Phys Ed teacher had such a wonderful voice. Dad had just moved to Parish and rented a room in the house next door to Mom. One day he was talking to Grandma Lewis in her front yard and Mom got into the conversation. Dad made a bet with her - if he lost the bet, he would take Mom out for a soda at Givo’s in Mexico, NY. That lost bet eventually led to their marriage on 6/26/1948. They honeymooned on Lake George and things got off to a rough start. Mom burned her nose riding in their convertible on the way there, Dad rolled over and elbowed Mom causing a black eye on their first night, and their car broke down on the way home taking all their money to fix it. And to think, they still went on to be happily married for over 55 years. Mom and Dad first lived across from her childhood home on Railroad Street. Then a few years later they bought the farmhouse on the hill on Route 69 where they raised four children. At different points there were cows, chickens and a pony named Peanut. Mom loved the house on the hill - the rhubarb patch, raspberries and blackberries in the backyard, her vegetable garden… so many memories of us all growing up there. She worked at Crandall’s Corner Pharmacy for a number of years - and got us jobs there when we were in high school. Mom enjoyed camping - tent, then trailer. We have great memories of trips to the Thousand Islands. And while she didn’t like to fish, she would clean dozens of fish without any complaint. Mom and Dad spent their later years in Florida. We have fond memories of watching them dance so gracefully at their community’s New Year's Eve party, the fun times at the VFW, and of the numerous friends they would invite over for drinks, games and lots of laughs. Mom enjoyed gardening, doing crafts, china painting and crocheting ‘scrubbies’. She always loved it when family visited. Mom moved back to NY in 2005 after Dad passed away and then from 2015-2019 lived with Joe & Amy in Pittsford, NY. Memories - the same breakfast of toast and instant coffee every morning, hours of puzzles, her love for our dog Bo, reading, and her pies! The best pie crust ever...the only pies where you wanted to eat the crust first. The markings on the pie crust were the same as her mother's pies - a tradition she has passed on to our families along with how to make the best peanut brittle. Our Mom had quite a sweet tooth. She loved ice cream (especially maple walnut), apple pie with a slice of sharp Cheddar cheese, and cookies of all types. Our favorite was her homemade molasses crinkles. Appropriately, her first computer password was "cookies." Her final years were spent in Maine - not the same as her home in Parish but she enjoyed the drives along the coast, lobster, clam chowder and whoopie pies, going out for frozen custard, and playing bingo. She kept a daily journal for well over 20 years and often looked back on her entries. It’s amazing to think of all the changes that occurred in the world over her 94 years. She experienced outhouses and wash tubs before having indoor plumbing, oil lanterns, a coal stove, washing clothes by hand and putting them through a wringer, switchboard operators to shared party lines to iphones. Up until a few months ago, mom was on her laptop to get news, read email and look at Facebook. Plus she used her iphone to text, FaceTime family and play solitaire. “Not bad for an old lady,” she would say. Blanche is survived by her sons Albert of Canton, OH and Joseph (Amy) of Scarborough, ME, 11 grandchildren, 14 great-grandchildren, 2 great-great-grandchildren, and many nephews and nieces. She was preceded in death by her husband Gordon Reese, son Randy Reese, daughter Jane Tillman, brother Albert Lewis, and sisters Thelma Beley and Irene Barnes. Our Mom was always caring, self-less, and happy-go-lucky. She will truly be missed by all. Private services will be held at a later date.

The Life Story of Blanche Eve Reese by Albert and Joseph Reese On March 14, 2022 Blanche Eve Reese peacefully passed away in Freeport, ME at the age of 94. Our Mom was born Blanche Eve Lewis on February 17, 1928 in Parish, NY. An error on... View Obituary & Service Information

The family of Blanche E Reese created this Life Tributes page to make it easy to share your memories.