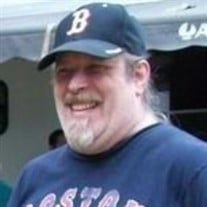 Portland- Bruce F. Calderwood succumbed to his chronic lung condition on Sunday, February 7th, 2021 at Maine Medical Center. Bruce was survived by his only child, Heather Whitaker, her husband Johnny Whitaker, and his 4 grandchildren, Aaryhanna Pettis, Andre Hicks III, Avante Hicks, and Amiyah Whitaker. He was the only son born to Alice and R.F. Calderwood, born on November 15th, 1958 in Portland, Maine. He was the Youngest of 5, leaving behind his four older sisters, Jean Meyer, Betty Martin (Ralph), Judy Gayton, and Carol Hodgkins (Bill). He was also survived by many foster siblings, nephews, nieces, and cousins that loved him dearly. Bruce received his education in the Portland school system. He then joined the Navy in 1977, where he served off the coast of Iran during the hostage crisis, and he finished his term in 1981. Upon returning from the Navy, he met his long-time friend and current roommate Daniel Crocker. He then went on to work for local moving companies, spending most of his time with E.W. Noise, he also drove and dispatched for local cab companies. For many years he was a member of Lyric Music Theater, performing in shows, painting, building, and moving sets, he also ran the board. He performed in a few shows at Portland Players and ran their board as well. He was known as “Pyro” or “Yup Yup” to the many he spent hours talking to over his CB about his love of Harleys, his beloved New England sports teams, or how he was a professional wrestling enthusiast that never missed a WrestleMania, if he could help it. He was a proud member of the Bosworth Post of the Sons of Union Veterans of the Civil War as well as the American Legion. The family will hold a graveside ceremony and celebration of life in either the late spring, or early summer. In lieu of flowers, contributions to help support Lyric Theater, the place he loved so much, would be greatly appreciated. Arrangements are in the care of Maine Cremation Care. To express condolences or participate in Bruce’s online tribute, please visit www.mainecremationcare.com.

The family of Bruce Franklin Calderwood created this Life Tributes page to make it easy to share your memories.