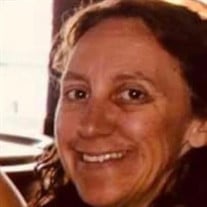 Catherine M. Russell, 59, of West Bath, Maine passed away peacefully at Midcoast Hospital after a courageous battle with cancer on April 19, 2021. Catherine was born in Beaumont, Texas on December 17th, 1961 to Edward Dauphin and Edith Mae Herald and was a graduate of Morse High School. She married Samuel C Russell III on August 15, 1987 in Wiscasset. Catherine was a dedicated employee of the Bowdoinham Country Store for many years and in addition held positions at both Lowe’s and LL Bean. Catherine had a passion for nature and very much enjoyed maintaining the gardens on her family’s land. She loved genealogy and learning more about her family history. She was selfless, sweet and soft spoken. Anyone who knew her would quickly fall in love with her kind heart. Catherine is predeceased by her father, Edward Dauphin, mother In law Dorothy Russell, father in law Samuel C Russell II, sister in law Joanne Russell. Catherine is survived by her husband of 34 years, Samuel C. Russell III of West Bath, son Samuel Russell IV and his wife Felicia Russell of Wiscasset, son Shawn Russell of West Bath, Daughter Tiffany Russell of West Bath, brothers George Dauphin of Bath, Edward Dauphin of Virginia, Gerry Dauphin of West Bath, sister Mary Bossick of North Carolina, step mother Ana Lou Elwell and three grandchildren, Odin Pono, Colton Russell and Noah Russell and many loving nieces, nephews, brother-in-laws, sister-in-laws, and many more friends and family. There will be a burial, however, a funeral service will be announced at a later date. Arrangements are in the care of Maine Cremation Care. To express condolences or participate in Catherine’s online tribute, please visit www.mainecremationcare.com

The family of Catherine Marie Russell created this Life Tributes page to make it easy to share your memories.