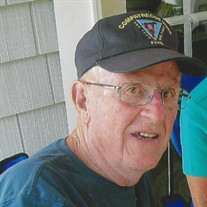 Conrad Gibbons Green was born in Franklin, Pennsylvania on October 25, 1936 to Richard and Alice Gibbons Green. He spent his early years in Franklin and Port Arthur Texas where his father worked building and operating oil refineries. On June 15, 1957 he married the former Lorraine Grace Hexamer and they spent more than 64 years together. Shortly after their marriage, Conrad received his education degree from Clarion State College and taught briefly before joining the Navy. Conrad served in the Navy for more than 20 years. Most of his career was spent as a navigator in anti-submarine aircraft. His concluding aircraft was the P-3 Orion which brought him and his family to Brunswick in 1970. During his naval career he was proud to be selected to serve for three years as an exchange officer with the Royal Canadian Air Force. He also served two tours of duty in Vietnam during that conflict. After retirement from the Navy, Conrad worked for ten years in the building and industrial trades. He then returned to school to get his certification and spent the next ten years teaching carpentry at Vocational Region Ten in Brunswick, a job he enjoyed as much as his Naval career. He loved his students and for many years following his retirement they would visit him at home to let him know about their successes. Love of Family, his many building projects, and the relationships he built over the years with neighbors, co-workers and students brought him great joy and left an enduring legacy. He was a great mentor. He was always there to help, to lead, and to support family and friends in anything that was important to them. Much of his life was spent in Harpswell Maine where he built and renovated homes on Allen Point Rd, Johnson Point, and Route 123. Conrad is survived by his wife Lorraine of 64 years, brother Richard Green, his children Mark Green and wife Teri; Dr. Martin Green and his partner Gail Wolek; Melissa Green and her husband Gary Coyne; grandchildren Jesse Aylward and his partner Abby; Samantha St. Amand and her husband Nick; Dr. Madeline Archer and her husband Jesse; Maggie Green and her partner Zsofia; Patrick Green; Abby Baker and her husband, Eben; and Nate Green and his wife Samantha. Conrad also had four great grandchildren. Conrad and Lorraine spent the past few years living at the Highlands in Topsham. Special thanks to the staff of the Highlands and the hospice assistance Conrad received through CHANS during his final few weeks. A memorial service will be held in early December. Arrangements are in the care of Maine Cremation Care. To express condolences or participate in Conrad's online tribute, please visit www.mainecremationcare.com.

Conrad Gibbons Green was born in Franklin, Pennsylvania on October 25, 1936 to Richard and Alice Gibbons Green. He spent his early years in Franklin and Port Arthur Texas where his father worked building and operating oil refineries. On June... View Obituary & Service Information

The family of Conrad G Green created this Life Tributes page to make it easy to share your memories.

Conrad Gibbons Green was born in Franklin, Pennsylvania on October...