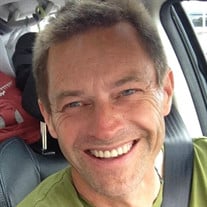 David Andrew Vieten&#8217;s way of seeing the world impacted many - through the art he created, the relationships he cultivated, and the passions he shared. David was born on August 9, 1966 in Redlands, California to his Mom, Jean Winifred... View Obituary & Service Information

The family of David Andrew Vieten created this Life Tributes page to make it easy to share your memories.

David Andrew Vieten’s way of seeing the world impacted many -...