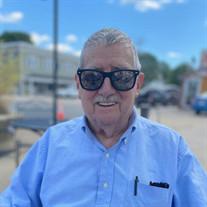 Donald Green, born March 16th 1935, died peacefully on October 23, 2021 in North Berwick, Maine. Don was born in South Portland, one of ten children born to George and Lucy Green. Don is survived by his younger sister, Marilyn Wellington, as well as his six children and their families (including lots of grandchildren and great-grandchildren).       Don lived in Southern Maine most of his life. As a child, he enjoyed walking or taking the bus into Portland to buy comics, going to the movie theater with friends, or spend all day swimming (he was a self proclaimed “water bug”).  His adventures continued well into adulthood. Later in life, he would make several solo, cross-country road trips. One of his favorite destinations was Las Vegas; he held onto an extensive collection of hotel keys, gambling chips from various casinos, and other mementos to remind him of his travels. Don was an avid reader and could easily read several novels a week. Throughout his life, he picked up a lot of knowledge of antiques, cooking, and a multitude of other topics. He was a fan of classic country music from when he was a young man, and despite some memory issues late in life, could easily remember lyrics to his favorite songs until his last days. He enjoyed visiting with friends at the American Legion. Prior to retirement, Don spent many years as a professional painter. At one point, he was featured on the cover of the Portland Press Herald with a paintbrush (and cigar) in hand. This time in his life was shared with one his all-time-favorite companions: Mickey, a Lhasa apso/shitzu mixed breed dog. Mickey could have found no better owner than with Don, and Don was always very grateful for his small friend. After retirement Don spent time visiting with family and helping to tend to his son’s pet chickens, which he very much enjoyed. Don had a dry, clever sense of humor and often jokingly bragged about his good looks and how he needed to “find a wealthy widow to settle down with.”      Fondly referred to as “Papa” by most of his family, he remained staunchly independent up until the very last days of his life, fighting until he lost the physical ability to do so. It is for his independent spirit, his humor, generosity, and one million other reasons why he will be missed dearly. Rest In Peace, Papa.  “Precious Lord, take my hand Lead me on Let me stand I'm tired, I am weak I am worn Through the storm, through the night Lead me on to the light Take my hand precious Lord, lead me home…” -Hank Williams Arrangements are in the care of Maine Cremation Care.  To express condolences or participate in Donald's online tribute, please visit www.mainecremationcare.com.

The family of Donald Richard Green Sr created this Life Tributes page to make it easy to share your memories.