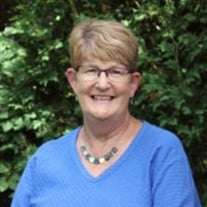 AUGUSTA – Donna R. Doore, 69, of Augusta, passed away Monday, January 31, in Portland following a heroic battle with cancer. Donna was a kind and caring person who always wanted to help others. She was born July 30, 1952 in Augusta, the daughter of the late Donald E. and Christine E. (Mason) Farrington. Donna grew up in nearby South China and graduated from Erskine Academy in 1970. She worked for the State of Maine most of her career. Following her calling to serve the public, Donna was a three term Augusta School Board member, a three term Augusta City Councilor – Ward 2 and currently serving her fourth term in the Maine House of Representatives – District 85. She was a volunteer little league coach and most recently was a member of the MaineGeneral Auxiliary. In her spare time, she enjoyed the family camp on Sebec Lake, visiting the coast of Maine, silversmithing and crafting. She is survived by her loving husband, Thomas F. Doore of Augusta, daughter Sarah Davies and husband Dan and their children Cal and Ella of Harpswell, son Mason Doore and fiancé Michelle Kimball and her daughter, Ashley Tobias of Augusta. Brothers Terrance Farrington and wife Jan of Chelsea; Lawrence Farrington and wife Janice of Greenville; Daniel Farrington and wife Deborah of South China; brother-in-law George S. Doore, Jr. and wife Mary Ann of Texas; along with her aunts, cousins and several nieces and nephews. A special thank you to her dear friend, Sandra Small-Hughes, for the care, love, and compassion she shared with Donna and her family. The family wishes to extend their heartfelt thanks to the care teams at the New England Cancer Specialists in Topsham and Scarborough and the Alfond Center for Cancer Care in Augusta. At Donna’s request there will be a private family gathering at a later date. The family requests, in lieu of flowers, donations in Donna’s memory be made to: Special Olympics Maine in care of Capital Area Federal Credit Union 2010 North Belfast Avenue, Augusta, Maine 04330. Arrangements under the direction and care of Maine Cremation Care www.mainecremationcare.com

AUGUSTA &#8211; Donna R. Doore, 69, of Augusta, passed away Monday, January 31, in Portland following a heroic battle with cancer. Donna was a kind and caring person who always wanted to help others. She was born July 30, 1952 in Augusta, the... View Obituary & Service Information

The family of Donna Ruth Doore created this Life Tributes page to make it easy to share your memories.