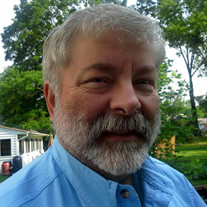 George Edward Leeper, age 65, passed away on April 23, 2021, with his wife and daughter present. George was born February 12, 1956, in Mckeesport, PA. During early childhood, he moved with his mother, Dorothy "Jean" Odend'hal, to Charlottesville, VA. Later, while working as an aide at the University of Virginia Hospital, he met his future wife - a nursing student named Shirley Winkler. George & Shirley excitedly got married in Charlottesville on August 19, 1978. For ten years, George was proud to serve as a soldier in the National Guard, the highlight of which was his deployment overseas to England on special assignment. In 1981, George & Shirley decided to seek new adventures and moved to Richmond, VA, where they lived until 2018. On December 30, 1986, George & Shirley were elated to have their first and only child, a daughter named Dana Leeper. In 1989, George began to work as a security officer at the Federal Reserve Bank of Richmond, where he would also serve as the facility's unofficial and most knowledgeable armory officer before finally retiring in 2016. In 2018, George & Shirley moved to Waterville, ME, in order to spend more time with their daughter, son-in-law, and two young grandchildren. Throughout his life, George accumulated an almost encyclopedic knowledge of important events in U.S. history, trains, and several other niche topics. George loved to spend his time with both his rescued pets and on many hobbies - including the construction of model train layouts & railfanning; reenacting the Civil War with the 19th Virginia; and attending air shows. George Edward Leeper is predeceased by his parents, Victor Andrew Leeper & Dorothy Odend'hal. He is greatly missed by his wife, Shirley W. Leeper; his daughter Dana E. Leeper, her husband, Ed, and her children, Mira & Eddie; his sister, Helene A. Campbell, and her husband, Tom; and by his many sisters-in-law, brothers-in-law, nieces, nephews, and hundreds of friends and fellow hobbyists. A small private remembrance and celebration of George's life will be held in central Maine on June 15, 2021. Contact George’s wife or daughter if you want to attend his remembrance. In lieu of flowers, George's family would ask that you give either a monetary or volunteered-time donation to the Good Shepherd Food Bank School Pantry. For more information about the Good Shepherd Food Bank School Pantry contact https://www.gsfb.org/programs/youth-family-initiatives/school-pantry/ Arrangements are in the care of Maine Cremation Care. To express condolences or participate in George’s online tribute, please visit www.mainecremationcare.com.

George Edward Leeper, age 65, passed away on April 23, 2021, with his wife and daughter present. George was born February 12, 1956, in Mckeesport, PA. During early childhood, he moved with his mother, Dorothy "Jean" Odend'hal, to Charlottesville,... View Obituary & Service Information

The family of George Edward Leeper created this Life Tributes page to make it easy to share your memories.