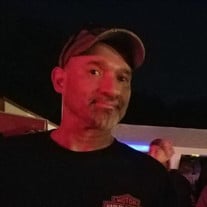 John (Cowboy) Fisher 1965 – 2022 AUBURN – John J. Fisher, 56, passed away on April 3, 2022. He was born in Lewiston, Maine on September 12, 1965, to Joseph E. and Doris T. (Raymond) Fisher. Many people knew him by his nickname: Cowboy and like the song says, it was on a Steel Horse he rode. He was in the Saracens Motorcycle club for almost ten years and loved riding his bike. He was a talented fabricator, machinist, welder, and mechanic. Much of his time was spent working on some fabulous motorcycle project, rather than riding though. Anyone who knew him or his work, were aware that Cowboy was a creative genius, and the results of his projects have been described as works of art. Several of his projects earned recognition in Easy rider and Biker magazine. His family was very proud of him and the fact that he was the epitome of a self-made man, choosing to live his life the way he wished to say the least. Cowboy lived the life that people mean when they say, “Be an Individualist, not a Conformist.” His life was one of a kind like everything he made. His brother Joe told him, many times, that he should patent some of his ideas and sell them to big companies that had the resources to make these ideas famous. His response was, “Why would I want to do that? I like to make custom one-of-a-kind things that nobody has. If I sold them to a company to mass produce, they would be everywhere and not special.” He lived his life in the same way: To not be like everyone else. He didn’t live his life for anyone else but him, even though many things in his life he did for others. Most of all though, he loved being around people. Socializing with friends, family, customers, just anyone to joke around with and making memories. He was very well-known, and everybody loved him because he knew how to treat them like they were a special person to him. Everybody who knew him had a “Cowboy” story/memory and most of those stories cannot be talked about in mixed company. --LOL Cowboy was predeceased by his parents and his youngest brother, James Fisher. He is survived by his son Joshua Cunningham and his significant other Auburn Hart of Auburn, sister Veronica Fisher, brother Joe Fisher and his significant other Kelly Morrison of Leeds and another sister Juanita Spencer and her husband Steve of Sabattus; grandchildren, nieces, nephews, his aunt Claudette in Lisbon and special cousins in Maine, Massachusetts and Florida. A celebration of life will be held on June 11th at 2 pm at the Saracens MC.- 524 Turner Rd, Turner, Maine. Condolences may be shared at www.mainecremationcare.com. His death occurred recently when his recovery from a paralyzing stroke in 2019 had sadly reached the point at which his brain could no longer communicate with the muscles in his body. So, it was time for Cowboy to fly away…time to Fly high like an Eagle. --Bye-bye.

The family of John Joseph Fisher created this Life Tributes page to make it easy to share your memories.