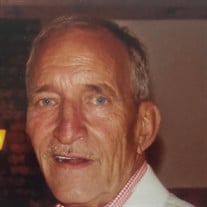 Roy Gibbens passed away peacefully, with his youngest daughter by his side, due to complications from pneumonia at Central Maine Medical Center in Lewiston Maine on October 29th, 2021. He was 77 years of age. Roy is predeceased by two children his son Zachary Jack Gibbens of Lewiston Maine and daughter Amanda Hope Gibbens, also of Lewiston. As well, his brothers Glenn W. Gibbens of Cochran Georgia and Gary W. Gibbens of Port Charlotte Florida. Roy is survived by his sisters Donna (Gibbens) Louthen and Patricia J. (Gibbens) Biehl. Roy is a long-time resident of Mechanic falls Where he has resided with his wife and lifelong love DawnaLee (Barrows) Crockett. Roy is survived by children Jason Kelly and wife MiSun Gibbens of Lancaster California, Christopher Roy Gibbens of Lewiston Maine, Suzanne Michelle and husband Peter McCaffery of Largo Florida, Shannon Marie (Gibbens) Anglada of Mechanic Falls Maine and Heather Jane (GIibbens)Trainer of Lewiston Maine. Grandchildren are aplenty for Roy. Zachary Tyler Gibbens, Nicholas Jerome Gibbens, Natalie Lynn Gibbens, Madison Kelly Gibbens, Courtney Lynn Gibbens, Chandler Donald Gibbens, Kylee Renee Gibbens, Andrew Jacob Gibbens, Ryan David Webster, Sydney Lee Anglada, Sage Ramses Anglada, Miriah McCaffrey, Jesse McCaffrey, Taylor Marie Webster, and Kendall Reece Irwin. Great-grandchildren are numerous as well and will miss their pop-pop undoubtedly. Roy was born in Miami Florida to father Jess W. Gibbens and mother Eleanor Ouida (Dorman) Gibbens on June 26th, 1944. He was the oldest of 5 children. Roy spent most of his work life in the residential/commercial electrical field but has been everything from a cobbler to a marine upholsterer to a chef and even a little bit of wheeler dealer. He enjoyed teasing and pranking his kids, grandkids, andgreat grandkids just as much as having a beer, playing pool, and watching football or current news events. His final wish was for cremation and his ashes to be spread into the Gulf of Mexico, as Florida was his second home after Maine. He will not only be missed by his immediate family but also by close friends, in-laws, cousins, nieces, nephews, work affiliates and just plain people that a normal day would bring him into their lives. A celebration of life for Roy will be planned for a future date, details to be announced.

Roy Gibbens passed away peacefully, with his youngest daughter by his side, due to complications from pneumonia at Central Maine Medical Center in Lewiston Maine on October 29th, 2021. He was 77 years of age. Roy is predeceased by two children... View Obituary & Service Information

The family of Leroy "Roy" S. Gibbens created this Life Tributes page to make it easy to share your memories.

Roy Gibbens passed away peacefully, with his youngest daughter...