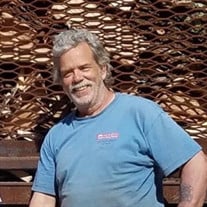 Mark Eric Killinger, owner of Atlantic Firewood and resident of Lakeside Drive, Windham, passed away on February 23, 2021 in the home that he built, with his wife Andrea by his side. Mark was born at Mercy Hospital in Portland, ME on June 27, 1959 to his parents Edward and Dorothea Killinger of Cottage Road, South Portland. He was 61 years old. Mark served in the Army from 1976 to 1982 and was stationed in Germany. He was a proud veteran and loved his country. After his service, he lived and worked in Germany as a truck driver for a period of time before returning home. He married Andrea on April 19, 1986 at Holy Cross church in South Portland. In 1987, he built the log cabin on Forest Lake that they have lived in for 34 years. In that home, they raised their four children - Andrew, Michael, Renata, and Leah – and have seen their family grow to twelve grandchildren. He was a loving husband, father, and grandfather and was affectionately known to his grandchildren as Opa. He loved listening to music, taking his grandchildren for rides on his four-wheelers, making the family pizza and Opa’s famous breadsticks, and roasting marshmallows at his fire pit. Mark owned several businesses before finding his true passion owning and operating Atlantic Firewood from his own yard. He was a man of many interests and vocations. He owned Royal Photography in Brunswick and Pine Tree Restoration in Windham, prior to creating Atlantic Firewood in 1998. Mark was a wonderful photographer who graduated from Fox School of Photography in Portland and could develop his own pictures. He taught himself and his two sons how to install hardwood and tile flooring, and process firewood. His son Michael will take over for him running the Atlantic Firewood business. Mark is survived by his wife Andrea Killinger; son Andrew Cahoon and his wife Jill; son Michael Killinger and his fiancé Kelly; daughter Renata Gravely and her husband Kirk; daughter Leah Killinger and her fiancé Tory; grandchildren Julia, Brianna, Sophia, Dominic, Maliyah, Anthony, Carmelo, Cameron, Colton, Gabriella, Giovana, and Jamison; and brothers Ray Killinger and Michael Killinger. He is predeceased by his parents Edward and Dorothea Killinger, and his brother Bobby Killinger. A private celebration of life will be held at his home this summer. Arrangements are in the care of Maine Cremation Care. To express condolences or participate in Mark’s online tribute, please visit www.mainecremationcare.com

Mark Eric Killinger, owner of Atlantic Firewood and resident of Lakeside Drive, Windham, passed away on February 23, 2021 in the home that he built, with his wife Andrea by his side. Mark was born at Mercy Hospital in Portland, ME on June 27,... View Obituary & Service Information

The family of Mark Eric Killinger created this Life Tributes page to make it easy to share your memories.