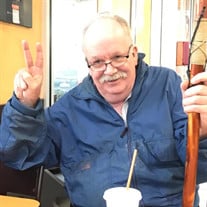 Peter R. Lake, Age 69, of Conway, formerly of Bridgton, ME passed away Tuesday, January 25th. Born in Pawtucket, RI to the late Allison G. Lake and Dorothea A. (Brown) Lake on March 17, 1952. Peter was granted his well-deserved rest after many years of illness. He grew up in Attleboro, MA where he attended Attleboro High School where Peter would agree, he was the funniest guy he ever meet. He was a music enthusiast who enjoyed anything from Bob Dylan to Native American Folk Music. He had a passion for computers and made many friends around the world through social media by acting as a proctor in many chat rooms over the years. One of his hobbies was setting up trail cameras and watch the wildlife footage. He enjoyed volunteering at several different fresh air camps in Maine where he would teach kids the joys of computing. An avid Red Sox fan he enjoyed listening to the games on the radio. He was the brother of JoAnn Walker of Centreville, MD, Deborah Lake of Pawtucket, RI, the late Katherine Maher, Stephen Lake of Sandwich MA, Patricia Hyde of Providence RI, the late Timothy Lake, and Nancy McGee of Pawtucket, RI. Peter is also survived by his daughters Sherri Lake and her husband Barry Ferris of North Attleboro, MA, Melissa Morissette and her husband Jason of Fryeburg, ME and a son, Kevin Thurston of Bridgton, ME. He was preceded by his beloved daughter Jessica Broadhead. His cherished grandchildren, Tyler Ferris, Randy Ferris, Connor Thurston, River Thurston, Jacob MacMullan, Gwen MacMullan, Willow Everett and Isabell Morissette. As well as many nieces and nephews. No services are planned at this time. In Lieu of flowers donations can be made in the name of Peter Lake to the Long Journey To A New Beginning Animal Rescue.

Peter R. Lake, Age 69, of Conway, formerly of Bridgton, ME passed away Tuesday, January 25th. Born in Pawtucket, RI to the late Allison G. Lake and Dorothea A. (Brown) Lake on March 17, 1952. Peter was granted his well-deserved rest after many... View Obituary & Service Information

The family of Peter Richard Lake created this Life Tributes page to make it easy to share your memories.