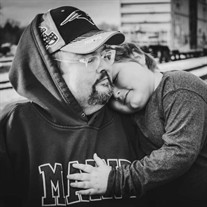 Rexford (Rex) Johnson 49 of Danville passed away peacefully with his wife and mother by his side on Wednesday April 13,2022. Rex was born March 30,1973 the son of Nancy Pulsifer and Fred A. Johnson. Rex grew up in West Minot and attended schools in Minot. He graduated from Edward Little High School in 1992. Rex had many interests and loved working with his hands and always had some project going whether that be a wood burning project or putting together multiple Lego sets that somehow always had to many pieces. Rex married the love of his life Christine in 2011. They could not stand each other in high school....but that got better. Rex developed many health issues and in 2019 was the recipient of a heart transplant. He was a true warrior and fought so fiercely through his recovery process. His son Avery was his driving force and motivation to keep going. Even with his best efforts as he would say "well that didn't go as planned." Rex is predeceased by his grandparents, his father Fred A. Johnson, Step Father Melvin Pulsifer, Mother -in-law Aline E Adams, and his heart donor Susan Eaton. Rex is survived by his wife Christine Johnson, son Avery Johnson, mother Nancy Pulsifer of LaMour, North Dakota, his inlaws Robert & Rosalie Moreau of Reading, Ohio, brother Lee Johnson of North Carolina, sister Karla Johnson-Bailey of Auburn, two step sisters Kate Heyd of North Dakota and Adele Heath of Fairbanks Alaska, his brother in laws who were his partners in mischief Michael Moreau and James Duddy of Saco, Scott Moreau of Auburn, sister in law Barbara Larrabee of Lewiston, A very special friend who became a sister Rose Stone, His "heart mother" Patti Eaton and many nieces and nephews. The family would like to thank the Nursing staff from Androscoggin Homecare and Hospice that helped with Rex's care for the last couple of months. The Family would also like to express so much gratitude to the Maine Medical Center LVAD and Transplant team. From the doctors, to the nursing team and medical assistants. They are so much more than a medical team they became our family and taught us what the best medical care should be in the most challenging times.

Rexford (Rex) Johnson 49 of Danville passed away peacefully with his wife and mother by his side on Wednesday April 13,2022. Rex was born March 30,1973 the son of Nancy Pulsifer and Fred A. Johnson. Rex grew up in West Minot and attended schools... View Obituary & Service Information

The family of Rexford Walter Johnson created this Life Tributes page to make it easy to share your memories.

Rexford (Rex) Johnson 49 of Danville passed away peacefully with...