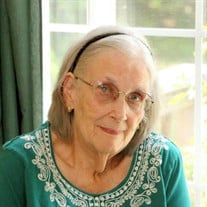 Lovell ME—Roberta Mary “Berta” (Cram) Chandler, 85, of Lovell, passed peacefully on January 26, 2022 in the company of family. Berta was born in Portland, ME on September 2, 1936, the daughter of Mayo and Margaret Bell Cram. She attended school in Lovell and graduated from Fryeburg Academy in 1953. She received her teaching degree from Farmington State Teachers College (now University of Maine Farmington) in 1957 and taught for a few years. She and John Royce Chandler (JR) wed in 1959 and had a son in 1960 when Berta chose to be a stay-at-home mom for a bit. Berta would later work for the Town of Lovell in various official capacities focused on collecting taxes, making sure bills were paid, and generally keeping the office running smoothly. She was the first—and for decades only—woman elected to the Board of Selectmen and was board chair. Yes, they were officially called Selectmen back then. She also served on the MSAD 72 School Board and Lovell Planning Board. Over the years Berta led many community volunteer activities and was active in establishing, and served as President of, The Lovell Historical Society and The Brick Church for the Performing Arts. She was a member of Fryeburg Rescue and threw herself into the assignment by becoming a certified Emergency Medical Technician (EMT). Many of these endeavors also involved JR, her lifelong best friend Irene (Allen) Dunham and Irene’s husband Kelly. When they set their sights on a goal one could be certain the task would be accomplished and they would have great fun and stories to tell for years to come. Over the years she was involved with the Charlotte Hobbs Memorial Lovell Library, was a Cub Scout den mother, and had too many other volunteering roles to mention. She was a longtime member of Eastern Star. All she did in the community was a fraction of the impact Berta had on scores of lives, especially children, many of whom refer to her as “Mimi”. To her beloved granddaughter Erin, with whom she cherished every opportunity to spend time, she was “Nana.” Berta would always light up whenever she saw young people and that never ebbed no matter how old she or they grew. One such relationship resulted in her taking her first airplane flight at the age of 83 to a Texas wedding of one of her young friends. Berta spent countless hours shepherding her son and his friends as they pursued their futile ambitions of becoming big league baseball players. She introduced her son to golf which she learned as a youth caddy—one of the few girls—at Lake Kezar Country Club. Of course it wasn’t just young people she loved. Her home was always open to visitors and traffic could be heavy. Over the years there were countless dinners and more than enough food on the table no matter how many people happened to show up. She was a wonderful conversationalist who could enter a room full of strangers and depart with old friends. Sometime she’d even identify previously unknown relatives of either her or JR due to her enduring passion for genealogy and following branches of their family trees. Possessing a wonderful sense of humor and flair for narration, she was often asked to deliver good news and bad—recent eulogies she has given were particularly memorable and uplifting. No matter the instant content of a message, the overriding sense one got listening to her was of kindness, good humor, and hope. It is the reader’s loss she couldn’t be at the keyboard for this message. While we will miss the special moments with Mom/Nana/Berta/Mimi, she will be with all who loved her in memory and spirit forever. Berta was predeceased by JR and her brother John Cram. She is survived by her son, John and daughter-in-law Brenda, of Falmouth ME, granddaughter Erin of Miami FL, sister-in-law Viola Cram of Fryeburg ME, and her “just-like-a” daughter Faith Wilson and Faith’s daughters Chelsey Walker, Brittany Walker Pottle and Makayla Martín, to each of whom “Mimi” was most definitely a bonus grandmother. The family would like to thank everyone who played a part in being able to care for Berta and carry out her wishes to stay in her own home. There are too many to name, but we are extremely grateful for all the help and love given by everyone. As per Berta’s wishes there will be no services. Any contributions in Berta’s memory may be made to a charity of one’s choosing.

The family of Roberta Mary Chandler created this Life Tributes page to make it easy to share your memories.