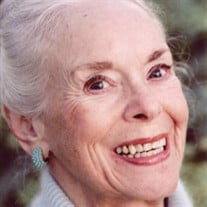 Sandra Sinclair Dinsmore, died on March 12, 2021, in Bath, Maine, after a four-month decline in health due to a stroke. Sandy, as she was affectionately known, was born on May 12, 1936, in Princeton, New Jersey, where her father, Robert Braddock Dinsmore, attended Princeton University years earlier. Sandy was popular and pretty, succeeding in school. She played the piano, sang, and performed in theater. She attended Bradford Junior College receiving her associates degree. Sandy met Charles A. Chapman, a Bowdoin College class of 1957 jazz drummer, They married in Castine, Maine, after Charlie’s graduation. They had three children in succession, Cameron Reed, Deborah Blackwood, and Wendy Robbins. Sandy divorced and moved back to Castine with the children in 1967, and worked as a secretary to Admiral Rodgers at Maine Maritime Academy. Upon returning to her hometown, she married her high school beau, Dr. Tom Robbins of Princeton, New Jersey in 1968. In 1971, Sandy divorced again. When attending an antiques show in Princeton, she became reacquainted with Drury ap Rice, a fellow dealer, living in Woolwich, Maine. They married and moved in 1974. Sadly, she was widowed in the fall of 1976. From 1976 to 1983 Sandy managed her antique business, wrote copy and advertising for Antiques and Maine Antiques Digest. In 1984 she attended Bowdoin College in Brunswick, ME, and the University of Massachusetts in Amherst, MA.Since 1989 Sandy worked as a volunteer and advocate for literacy and the arts, wrote articles for The Penobscot Bay Press, Ellsworth American, The Working Waterfront, Fisherman's Voice, Maine Times, Bangor Daily News, Down East, Island Journal, Maine Boats and Harbors, Points East and Wooden Boat. Her last 20 years were spent writing about the working waterfront for Commercial Fisheries News, and books, More By Eye Than By Measure, which was nominated for a Maine Literary Award in 2020. Sandy is survived by two sisters, three children, six grandchildren, and six great-grandchildren, cousins, nieces and nephews. Arrangements are in the care of Maine Cremation Care. To express condolences or participate in Sandy’s online tribute, please visit www.mainecremationcare.com.

Sandra Sinclair Dinsmore, died on March 12, 2021, in Bath, Maine, after a four-month decline in health due to a stroke. Sandy, as she was affectionately known, was born on May 12, 1936, in Princeton, New Jersey, where her father, Robert Braddock... View Obituary & Service Information

The family of Sandra Sinclair Dinsmore created this Life Tributes page to make it easy to share your memories.