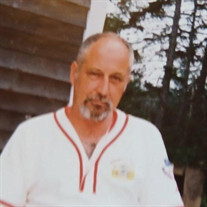 William “Bill” Dow, 67, died of pneumonia on Sunday, November 28th in Portland, Maine with his brother, Richard, by his side. He was dearly loved and will be sorely missed by his wife, Ruth E. Dow of Portland, brothers Richard Dow of Auburn, Frank “Butch” Dow of Sabattus, ME daughters Mary Anne (Chris) Klement of Conway, NH and Barbara Ivey of Gorham, Maine and many nephews and nieces. In boyhood, Bill lived in Scarborough with his mother and brothers. His grandparents whom Bill loved dearly and had a special relationship, helped to raise Bill until age 9. Later, he and his family moved to Auburn where Bill graduated from Edward Little High School. After school, Bill was a cook and later worked in paving and construction. He was later self-employed as a painter, starting “Will Do” painting and maintenance. He was sought after because of his attention to detail and his forthright manner with potential clients. He was contracted for many apartment complexes in Portland. Bill is remembered by all who knew him as a kind and giving man who always put others’ needs before his own. Butch remembers Bill as a free spirit who would take the shirt off his back to give it to someone else in need. He’ll miss Bill’s sense of humor and big heart. Richard fondly recalled his brother's ability in baseball at Edward Little High School. This early love of baseball carried over as “Papa” to Derek, who also enjoyed baseball in Little League and high school. Papa could always be counted on for gentle encouragement and genuine praise. His wife, Ruth, remembers Bill as a fun, caring, and devoted husband. They enjoyed watching and betting on horses at Scarborough Downs, would take rides to enjoy the scenery and country music on the radio, and often found time to visit their kids and grandchildren. Richard recalled Bill’s fondness for animals which was fortunate considering Ruth’s love for cats. They lovingly kept a dog and many rescue cats over the years. On many occasions, Bill would happily dog-sit for his family. He was predeceased by his parents Frank Burr Dow and June Skillings. He is survived by his wife, Ruth of Portland, Maine, brothers Richard Dow of Auburn, Maine and Frank Dow, III of Sebatus, Maine, step-daughters Mary Anne (Chris) Klement of Conway, NH and Barbara Ivey of Gorham, ME. A celebration of life will be held at a later date.

William &#8220;Bill&#8221; Dow, 67, died of pneumonia on Sunday, November 28th in Portland, Maine with his brother, Richard, by his side. He was dearly loved and will be sorely missed by his wife, Ruth E. Dow of Portland, brothers Richard... View Obituary & Service Information

The family of William Chester Dow created this Life Tributes page to make it easy to share your memories.